KIM BUDIL is the 13th director in the history of Lawrence Livermore National Laboratory. She also serves as president of Lawrence Livermore National Security (LLNS), LLC. Budil leads a workforce of approximately 7,400 employees and manages an annual operating budget of approximately $2.7 billion. As director, Budil sets the strategic vision for the Laboratory and exercises broad delegated powers to ensure successful execution of programs and operations to advance science and technology for the nation and to maintain an outstanding and diverse workforce. The director leads the development and implementation of the Laboratory’s scientific vision, goals and objectives, and serves as the Laboratory’s highest-level liaison with DOE, NNSA, the LLNS Board of Governors, the University of California and other government, public and private organizations. Read More about Kim Budil 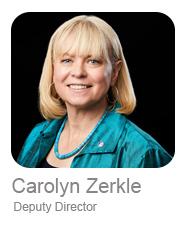 CAROLYN ZERKLE is deputy director of Lawrence Livermore National Laboratory and vice president of Lawrence Livermore National Security (LLNS), LLC. Zerkle participates in the day-to-day management of the Laboratory and works closely with the Livermore Field Office (LFO), the LLNS Board of Governors, the Department of Energy/National Nuclear Security Administration (DOE/NNSA), other national laboratories, industry, and the local community. She oversees key institutional priorities, including safe and successful operations and vital infrastructure to support program deliverables; recruitment and retention of a quality operations workforce; and efficient business and operational approaches. Previously, Zerkle was senior director for Project Execution in the Plutonium Infrastructure Directorate in Los Alamos National Laboratory’s (LANL) Weapons Program, overseeing an $8 billion portfolio of nuclear construction and equipment installation in support of LANL’s pit manufacturing mission. Zerkle earned an undergraduate degree in architecture and civil engineering from the Massachusetts Institute of Technology, and graduate degrees in architecture and business, focusing on nuclear construction project management, from the University of Illinois-Urbana/Champaign.

GREGORY COX is the director of the Security Organization. In this role, he is responsible for leading an organization charged with the protection of LLNL’s personnel, access, information, property and nuclear materials  against a broad range of threats. Prior to joining the Laboratory, Cox served as the assistant director of the Federal Bureau of Investigation’s (FBI) Critical Incident Response Group, where he had responsibility for all global crises, including crisis management, tactical operations, crisis negotiations, hostage rescue, hazardous device mitigation, critical incident intelligence, surveillance, aviation and behavioral analysis. He served with the FBI for more than 25 years in various international counterterrorism/counterintelligence positions, including special agent in charge of the Counterintelligence Division at the Washington Field Office and as a member of the International Terrorism Operations Section in the Counterterrorism Division at FBI Headquarters, where he managed al Qaeda and Osama bin Laden-related investigations. Cox also served as the legal attaché to Copenhagen, Denmark, where he worked to enhance the relationship between the FBI and foreign partners in five countries, on counterterrorism issues, cyber matters and international organized crime.

GLENN FOX, has more than 20 years' experience working in physical, chemical and life sciences. As associate director of the Physical & Life Sciences directorate, he has responsibility for research and development, including nuclear, particle and accelerator science; condensed matter and high-pressure physics; fusion energy; medical physics and biophysics; earth sciences, chemistry optical sciences and instrumentation; and high-energy-density physics. Fox has served in a number of leadership roles at the Lab, including deputy associate director of Science & Technology, leader in the Chemical Sciences Division in Physical & Life Sciences as well the director of the Forensic Science Center. Fox has a doctorate and master's degree in inorganic chemistry from the University of Colorado, Boulder, and a bachelor's degree in chemistry from Lewis and Clark College in Oregon.

HUBAN GOWADIA is the principal associate director for Global Security. She is responsible for programs that support international and domestic security, overseeing the Laboratory's responsibilities in intelligence analysis, energy security, nonproliferation, nuclear counterterrorism and addressing chemical, biological and explosive threats. Gowadia has more than 20 years of experience supporting national security, and has served at the highest levels of government including multiple organizations in the Department of Homeland Security and the Federal Aviation Administration. During the recent presidential transition, as acting administrator for the Transportation Security Administration, she led a workforce of more than 60,000 employees charged with protecting U.S. transportation systems and the traveling public. Prior to that she served as the presidentially appointed director of the Domestic Nuclear Detection Office at the Department of Homeland Security. Gowadia received her bachelor's degree in aerospace engineering from the University of Alabama and her doctorate in mechanical engineering from Pennsylvania State University.

BRUCE HENDRICKSON is the Laboratory's associate director for Computation. In this role, he leads an organization of more than 1,000 staff with responsibility for the full breadth of the Laboratory's computational needs including research, platforms, and services. A major focus is on the mathematics, algorithms, systems software, and platforms for advanced modeling and simulation. A growing emphasis is on the development and application of data science technologies to address the Laboratory's complex applications. An additional priority is providing world-class information technology support for the Laboratory's diverse mission and business needs. Hendrickson came to the Laboratory after a long career at Sandia National Laboratories, where he led the Center for Computational Research and managed Sandia's Advanced Simulation and Computing program. Hendrickson has degrees in mathematics and physics from Brown University and a Ph.D. in computer science from Cornell University. He is a highly published and cited scientist and his research has garnered a number of international awards. Hendrickson is a former Hertz fellow and is a fellow of the Society for Industrial and Applied Mathematics and of the American Association for the Advancement of Science.

CYNTHIA RIVERA is the principal associate director for Operations & Business, where she leads a multidisciplinary 1,000-person organization. She serves as a key leader for Laboratory operations and represents the Laboratory externally to DOE, NNSA, peer organizations and laboratories, as well as private industry and the local community. She has over 28 years of leadership experience at Department of Energy and Department of Defense facilities. Her background includes support and technical operations, as well as project management responsibilities. She joined the Laboratory from Bechtel Power Company’s Vogtle Nuclear Power Plant Units 3 & 4 construction project, where she served as manager of Functional Resources. She holds an M.A. in communication studies and a certificate in business management, both from the University of Nevada,

ANUP SINGH is the associate director of Engineering. Singh is responsible for leading an organization of approximately 2,300 employees who provide world-class engineering expertise, capabilities and research to ensure the success of the Laboratory’s programs and sustain the long-term vitality of the Laboratory’s engineering foundations. Singh joined the Laboratory from Sandia National Laboratories (SNL), where he served as director of the Center for Biological and Engineering Sciences, managing critical capabilities in support of Sandia’s Energy & Homeland Security, Global Security, Nuclear Deterrence, and Advanced Science and Technology portfolios. In 2020, he served on a special assignment coordinating the COVID-19 R&D, serving as the Sandia representative on DOE’s National Virtual Biotechnology Laboratory team and assisting with operational response efforts at Sandia. Singh also holds an appointment as adjunct professor at the University of Texas Medical Branch in Galveston and serves as the director of Microfluidics at the Joint BioEnergy Institute, a DOE-funded Bioenergy Research Center. He is internationally recognized for his scientific leadership in microfluidics and has published more than 100 peer-reviewed publications, and his inventions have led to more than 40 patents and patent applications. He holds a bachelor of technology degree in chemical engineering from the Indian Institute of Technology, Bombay, India, and a Ph.D. in chemical engineering from North Carolina State University.

BRADLEY (BRAD) WALLIN is the principal associate director for Weapons and Complex Integration. As PAD, Wallin leads the Laboratory's nuclear weapons program in its responsibilities to support U.S. strategic deterrence by assuring the safety, security and effectiveness of the nation’s nuclear weapons stockpile and by providing the science, technology and engineering (ST&E) capabilities and experts required to enable and advance this essential responsibility. Wallin holds a Ph.D. in physics, an M.C.S. in computer science and an M.S. in physics from the University of Illinois at Urbana-Champaign and a B.Sc. in engineering physics from the Colorado School of Mines. He has worked at LLNL for over 20 years and has held leadership positions of increasing responsibility across the weapons program including nuclear weapons design code development, high-performance computing, dynamic material properties, subcritical experiments, startup and management of nuclear facilities, and high energy-density experiments.

PETER J. (JEFF) K. WISOFF is the principal associate director of NIF and Photon Science. Wisoff came to Lawrence Livermore National Laboratory in the fall of 2001 as a deputy associate project manager for systems engineering at the National Ignition Facility. In 2003, he became the associate project manager for small optical systems on NIF, which included responsibility for the front end of the laser and laser diagnostics. Prior to assuming the role of principal associate director he served as the principal deputy, managing the directorate operations team, which provides facility, information technology, environment, safety and health, security, and administrative services to the directorate. After graduating from the University of Virginia in 1976, Wisoff began his graduate work on the development of short wavelength lasers at Stanford University as a National Science Foundation graduate fellow. Upon completing his master's and doctorate degrees at Stanford in 1986, Wisoff joined the faculty of the Electrical and Computer Engineering Department at Rice University. Selected as an astronaut by NASA in January 1990, Wisoff is a veteran of four space shuttle flights. He conducted three spacewalks totaling almost 20 hours that included testing tools for the first Hubble Telescope repair mission, construction of the International Space Station, and the test flight of an astronaut jet pack. Wisoff has received a number of honors with NASA, including the NASA Distinguished Service Medal (2001) and four NASA Space Flight Medals (2000, 1997, 1994, and 1993).

LISA WOODROW is the director of Environment, Safety & Health, responsible for oversight and management of all ES&H matters and assuring a strong ES&H awareness for the Laboratory. She brings more than 20 years of experience to her role, including 14 at the Laboratory. Prior to ES&H director, she was the institutional champion and program manager for Work Planning and Control, and she served in various operations leadership positions in the Lab's Weapons & Complex Integration and NIF & Photon Science directorates. Prior to joining the Laboratory, she spent time in various operations management roles at Los Alamos National Laboratory, including facility management, maintenance, ES&H, work control and training. She began her career as an industrial hygienist. She holds a bachelor's degree in industrial safety from Indiana University of Pennsylvania, a master's degree in industrial hygiene from Texas A&M University and an MBA from the University of New Mexico.